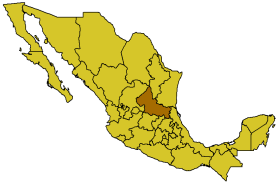 Authorities said the suspects told them they believed Zapata and his partner Victor Avila — who was wounded in the attack — were members of a rival gang because of the vehicle they were driving.

The suspects belong to a cell of the Zetas, a violent criminal gang headquartered in the cities bordering South Texas.

Military intelligence officers had been aware of the gang’s activities in the state capital, also called San Luis Potosi, since last December, Defense Department spokesman Ricardo Trevilla said. Soldiers went looking for the gang in the wake of the U.S. agent’s killing.

This is pretty quick work by Mexican authorities who were apparently familiar with the gang, but had not got around to arresting them before the shooting. Lawmakers in the US are considering lifting a ban on carrying weapons in Mexico for US agents. I think that is a good idea.