The Eagle Ford play at night 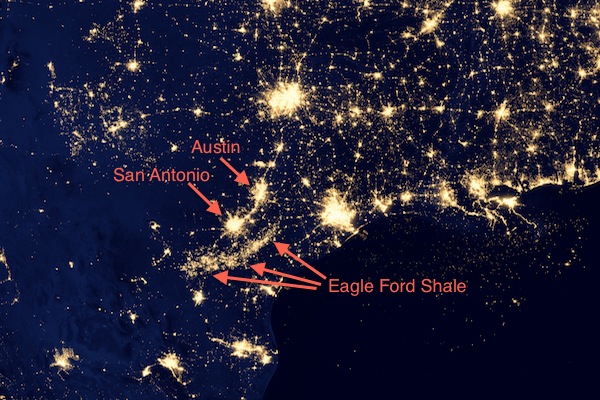 
It can be difficult to comprehend just how big the current U.S. shale boom is. Here in Central Texas, we hear about the Eagle Ford Shale and how it’s transforming South Texas (in both positive and negative ways).

The shale, named for the town of Eagle Ford, TX, is a geologic remnant of the ancient ocean that covered present day Texas millions of years ago, when the remains of sea life (especially ancient plankton) died and deposited onto the seafloor, were buried by several hundred feet of sediment, eventually turning into the rich source of hydrocarbons we have today.

The shale was first tapped in 2008 and now has around 20 active fields goodproducing over 900 million cubic feet per day of natural gas. For perspective, the United States produced over 2 trillion cubic feet of gas in September 2012.

There is so much activity in the Eagle Ford Shale that you can see it from space.

The bright spot to the right of the Eagle Ford formation is Houston and you can see Dallas and Fort Worth above Austin.  The western edge of drilling activity is the Mexican border and the eastern edge at this point is I-10 which stretches as a straight line from Houston to San Antonio.  The formation is supposed to stretch as far as Bryan College Station which is the bright spot slightly west of north of Houston.  The dark area below Bryan College Station is where Washington is located.  While there are some wells around we don't have the activity you see in the Eagle Ford.  The rigs tend to be brightly lit at night as they work around the clock.  Once the well is completed you sometimes see gas being flared.