Regulatory 'reform' overlooks the cause of the problems 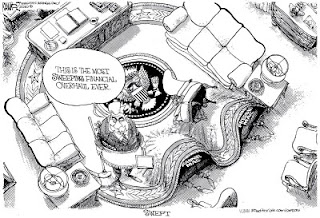 The financial reform bill that's about to be passed is reform in name only. It does little to correct the problems that led to our meltdown, and may do more harm by giving people a false sense of security.

The media have called this "compromise" legislation the most sweeping change in U.S. financial regulation since the 1930s. Which is saying a lot.

The two sponsors, Rep. Barney Frank and Sen. Chris Dodd, are as much responsible for the financial crisis as any two people in America. Yet, we're now supposed to believe that they, and their flailing party, which can't even meet its legal obligation to produce a budget, have now fixed our financial system.

President Obama crowed about it in the press, and planned to use the bill as leverage in negotiations with his European counterparts at the G-20 meeting. Obama hopes to sign the bill by July 4.

Before you get too excited, you should know the "compromise" in Dodd-Frank isn't between Republicans and Democrats, but between Democrats and Democrats. In short, it's the left's idea of how to regulate Wall Street. And while some things in the bill aren't bad, most of it is.

We won't go into everything the bill would do, since the 2,000-page tome can't be distilled into a few easy-to-digest bullet points. But what we can tell you is what it doesn't do, which is plenty. In fact, the bill fails to address any of the key issues raised by the 2007-08 market meltdown, while imposing onerous new restrictions on both banks and consumers.

For instance: Fannie Mae and Freddie Mac, which were inarguably at the heart of the financial crisis, and which have already cost U.S. taxpayers $146 billion (with hundreds of billions more on the way), aren't addressed in this bill at all.

This is insane, given the role these two government-sponsored enterprises played both in encouraging lending to poor, unqualified homebuyers and repackaging those securitized loans for resale to banks and investors around the world.

Regulatory reform should have started with Fannie and Freddie and the securitization process that led to the debacle. The reform package largely punishes the victims of the Fannie and Freddie mess that cost many in the industry billions of dollars and put some out of business. I have been harping on this for too long, but I am going to keep at it until someone goes after the problems caused by Fannie, Freddie, Barney Franks and Chris Dodd. What the Democrats have produced is another "death star" bill that they have little idea what is in it and what it will do, but we know enough about what is not in it to know it is a mistake of the first order.

Perhaps the only good news that may come out of this mess, is that Wall Street donors know their investment in Chuck Schumer was a waste as was all the protection money paid to Democrat to help them get a majority.

The Michael Ramirez cartoon captures the spirit of the legislation. Click on the image for a larger view.
Barney Franks Campaign finance Democrats Dodd Finance