...
This attack comes in the recent wake of another deadly attack in New Jersey by extremists connected to the Black Hebrew Israelites, where a Jewish school looked to be the initial target. Four Jews were killed in the neighboring kosher market after they failed to get the door to the school open.

Because none of these attacks fit the “white supremacist” narrative, they’ve been mostly ignored. While the Tree of Life shooting stayed in the news for weeks, including full reaction at the funerals, the Jersey City shooting managed about half a day in the news cycle and there was no “national conversation.” The major outlets punted on the story within hours.

As news broke early this morning that police had apprehended the stabber of this newest attack and that he wasn’t a white nationalist, the hot takes from Democrat intersectionalists started to roll in and they are just disgusting.

Erin Biba had a Nuremberg Laws meltdown over Trump's anti-Semitism EO but a bunch of Jews get stabbed and she's like "ackshually this is a complicated situation because Jews are bad neighbors." 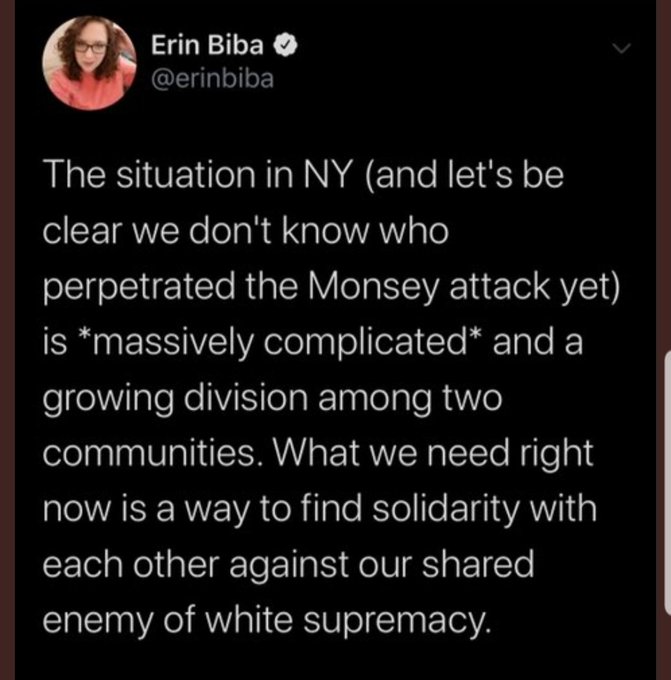 626 people are talking about this
Biba, who does work for NBC News and National Geographic (among others), has wisely since deleted that tweet. It does encapsulate the gross thinking on the left when it comes to anti-Semitism, namely that it only matters when it’s carried out by a white supremacist.

She’s also clearly victim blaming, attempting to place responsibility on “divisions” caused by Jews, which is nonsense. These Orthodox communities are as law-abiding and introspective as possible in the United States. They aren’t attacking others and stoking divisions. The extremism and bigoted discrimination is a one way street in this case and it’s not coming from Jews.

The New York Times was also quick to obfuscate and omit key details from the story in their writeup, further underscoring how dishonest and politically driven the mainstream media are.

Jews were stabbed at a synagogue on Hanukkah and The New York Times won't even use the term "hate crime," it's a "bias crime" because the attacker — at least based off initial reports — was not white pic.twitter.com/IXrDPEbrky
— Ryan Saavedra (@RealSaavedra) December 29, 2019


I wish those were the only examples, but they aren’t. There are many others. Here’s a Washington Post writer blaming Trump for black discrimination against Jews, something that makes no sense at all.

From 6th-9th grade, I attended Ramaz, a modern orthodox private Jewish school in Manhattan. I had friends who had houses/family in Monsey, NY. This hits really close to home. https://www.nytimes.com/2019/12/28/nyregion/monsey-synagogue-stabbing-anti-semitic.html?smid=nytcore-ios-share …

The governor called the violence an “act of domestic terrorism” after a suspect was arrested in Harlem.
nytimes.com

Mairav Zonszein מרב זונשיין
✔@MairavZ
Just to be clear, I hold the Trump White House directly responsible for the increasing violent attacks on Orthodox Jewish people in America. It should be clear now that exceptionalizing Jews- whether in a negative or positive light- endangers us and keeps us forever at risk

1,098 people are talking about this

Meanwhile, this Democrat running for Congress and former Obama Administration official also decided to make this about the President.
...

The left tries to ignore black anti-semitism which is a serious problem, especially in the New York area.  When two of the leading newspapers in the country can't handle the truth about those responsible they should admit they have a problem.

The so-called "white nationalists" are political orphans in this country they get no support from any political party.  But black anti-semites have found a home in the Democrat party and it appears unwilling to challenge their bigotry and abuse.  There have been a series of attacks on orthodox Jews in the New York area.  They are easy targets because they wear distinctive outfits which makes it easy for the bigots to spot them.
racism