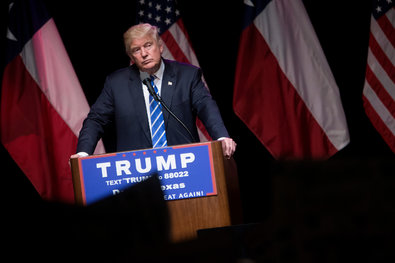 Donald J. Trump at a campaign event in Dallas this month. In 2005, he lent his name to a venture, the Trump Institute, that promised falsely that he had handpicked its teachers.
The institute, to which Donald J. Trump lent his name in 2005, was owned by a couple accused of fraud, and its educational materials had been lifted from an old real estate manual.

This raises questions about his management ability and  judgment in deciding who he will entrust with a business or job.  It goes to the heart of his premise that he should be trusted to run the government because he ran successful businesses.

It also raises the question of why this story was not run during the primary season.  I think Ted Cruz was on to something once again that the media was holding back stories in hopes that Trump would get the nomination and then they would destroy him.  This looks like one of those stories.
corruption Media Ted Cruz Trump