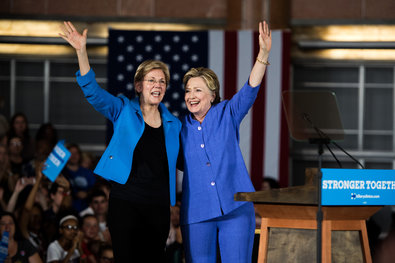 Warren is an anti-capitalist intellectual lightweight with a history of using dubious means to qualify as an affirmative action hire at Harvard.  She was grossly overpaid for teaching one class.  She has harped on Wall Street while Hilary has been raking in money from the same people Warren attacks.

Meanwhile has the highest negatives of any candidate in history and he did it all on his own without Hillary's negative ads and Warren's insults.  Attacking Trump is like wrestling with a pig in the mud.  He will respond in kind and will enjoy more than she will.

In fact, Hillary Clinton's bigger problems are her own negatives which keep getting worse every day with new revelations about her false and misleading statements about her email and other aspects of her record.  She tends to lie when the truth would serve her better.  Her biggest advantage is a media that wants her to win despite all her glaring faults.
Hillary Clinton Warren