So why are these migrants trying to get to Europe instead of other Muslim countries? 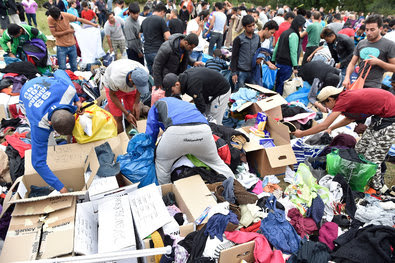 Migrants in Germany, which is generally seen as generous in its acceptance of refugees, looked through donations at a shelter in Heidenau.
The escalating death toll has highlighted the bloc’s failure to quit squabbling and come up with a unified plan for a crisis months in the making.

One of the answers is the Muslim culture is failing in countries run by Muslims. One of the dangers to Europe is that these people will cling to that failed culture when they settle in Europe.  That will lead into increased violence through out the continent.

The best way to slow the migration is to take effective military action against the major producers of this violence in the Middle East.  That would start with seizing the territory held by ISIL and al Qaeda.  Europe has the means to do this along with the US.  It just lacks the will to stop the suffering at its source.

There is also the political correctness that plagues the continent that refuses to recognize that Islam is at the root of the failure of the countries in the Middle Eat and North Africa.  There is also an unwillingness to work with countries in the region who are trying to do something about it like Egypt.

Another thing attracting the migration is the European welfare state.  This has the effect of putting added strain on the European economy which has been slowed by its attempt to covert of inefficient green energy.
Africa Europe Middle East Muslims