NY Times gets played by lawyer for fired FDA official?


It’s almost like The New York Times is nothing but a partisan gossip rag.

Yesterday, a story was put out by Maggie Haberman that made a rather convenient claim that just so happened to reinforce every media narrative. Namely, that an FDA official named Rick Bright was fired for selflessly sounding the alarm on the supposed vast dangers of hydroxychloroquine.
...
But, like all stories that appear in the Times and other mainstream outlets, it’s always best to give them a few hours. In this case, it didn’t take long for the real story to start coming out and you’ll be shocked to learn that Haberman’s original piece was completely wrong.

For example, Bright himself requested the FDA give emergency approval for hydroxychloroquine.
...

Does that sound like someone deeply skeptical of the drug who’s just attempting to stop that dastardly orange man from harming people?

It gets worse, though. 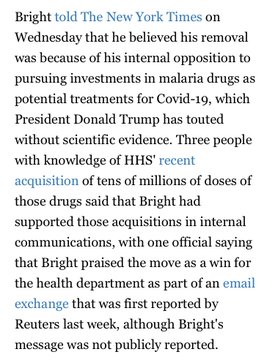 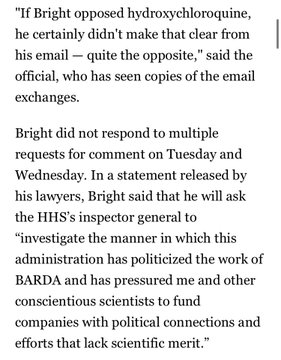 Dan Diamond
✔@ddiamond
The Trump administration has been working to oust Bright since last year, as officials battled with him over his management and leadership.

With permission, sharing this time-stamped text from individual with knowledge of those fights. 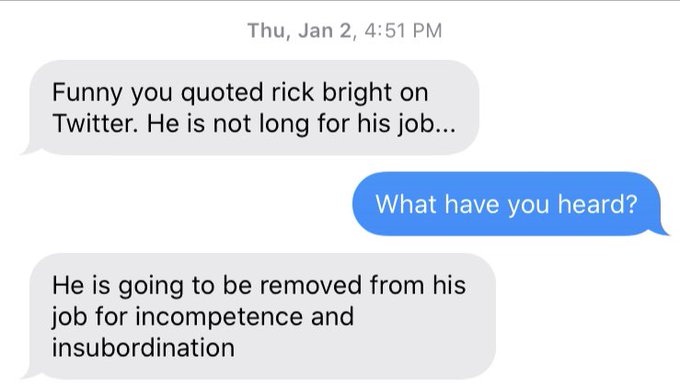 480 people are talking about this
Not only was Bright not fired for anything to do with hydroxychloroquine, his ouster has been in the making long before anyone was even concerned with the Wuhan virus. Apparently, Bright has a history of insubordination and believing he has more authority than he does. Knowing that he was going to be fired anyway, he’s now spinning a fake narrative that he was simply a hero trying to save lives.

But are you ready for the best part? He’s now hired Christine Blasey Ford’s lawyer, so you know this is totally legit.

Yes, Bright is hiring Debra Katz, whose malfeasance during the Kavanaugh hearings is well known. No doubt this is an attempt to push Bright as a “whistle-blower,” either for money or via another Congressional farce. It’s also not a coincidence that Haberman knew Bright was hiring Katz almost immediately. The likely explanation is that this entire story came from Katz in the first place and Haberman either got worked over or willingly chose to be her mouthpiece.

There’s a reason the Hillary campaign described Maggie Haberman as a reporter they can count on. She and the Times continue to put out half-baked, false stories knowing they can hide behind the idea that they were simply reporting what they were told. Apparently, verifying information isn’t within their purview.
...

Trump has said that Haberman should return the Pulitizer she was awarded for pushing the Russian collusion hoax.  The allegations of this story suggest she was a victim of another false and misleading story.  It looks like she has become the go-to person for pushing false narratives against the Trump administration.  That is not a good look for the NY Times.

It also looks like ABC reporter Jon Karl misstated the situation in California claiming the state was ignoring Trump administration requirements when in fact they were following guidelines precisely.
Media