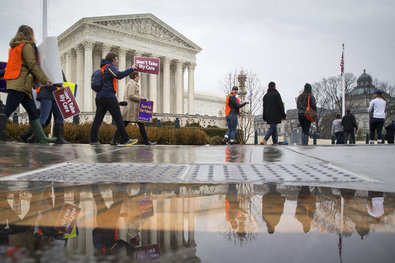 Demonstrators outside the Supreme Court on March 4 as justices heard arguments in King v. Burwell, a case that could decide the fate of the Affordable Care Act.
Democrats and Republicans say a clause affecting subsidies, now before the Supreme Court, was an inadvertent product of a sloppy merging of versions.

Obamacare was drafted by Democrats and they rejected any Republican input on the law.  But now they want to blame Republicans for their screw up and any fallout if the court rules against the attempt to get around the clear language they left in the law.
Democrats health care