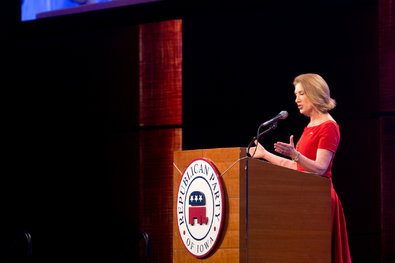 Carly Fiorina has been among the most frequent visitors to Iowa in the Republican field. Her campaign is expanding in the state faster than those of some of her rivals.
Republicans in Iowa are starting to swoon over Ms. Fiorina, a former Silicon Valley executive who is mostly unknown in much of the country.

I think she is attracting attention because she is smart and she is willing to take on Hillary and the Democrats.  She has been willing to take on the media and her critics in a clever way.  I think California made a terrible mistake in not electing her over Barbara Boxer.  Fiorina is much more intelligent.
2016 Election Fiorina