From labor thugs to right to work in Michigan 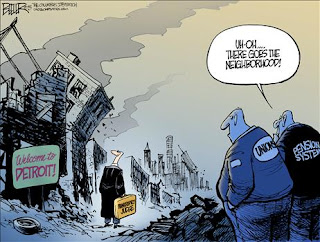 
Vincent Chin was enjoying his bachelor party in the all-American manner: His friends took him to a strip club in Michigan's Highland Park. The fun ended abruptly when they started home and two men attacked them.

"Because of you m----- f------, we're out of a job!" Ronald Ebens shouted. His stepson, Michael Nitz, held Chin down while Ebens beat Chin's head with a baseball bat until his skull cracked. Chin died four days later on June 23, 1982.

Ebens, a former Chrysler plant supervisor, mistakenly thought Chin was Japanese. In fact, his parents were Chinese, he had lived in the U.S. since age six and was an autoworker just like them.

Chin's assailants were convicted of manslaughter and received suspended sentences. A sympathetic judge said: "These weren't the kind of men you send to jail."

The incident exposed the seething anger sparked in Michigan by the rise of the Japanese auto industry in the 1970s.

After decades of virtually no foreign competition as Germany and Japan rebuilt after World War II, the Big Three automakers suddenly found their home market share under attack.

The Japanese invasion was accompanied by a deep recession and rising gas prices. There were fewer car buyers, and many of them sought something Detroit didn't have - more compact, fuel-efficient vehicles.

GM closed 11 plants by 1983 as industry layoffs reached half a million, and the United Auto Workers lost more than 40 percent of its members.
...

Detroit labor leaders became so desperate they encouraged Japanese automakers to build U.S. factories, but they weren't interested in working under U.S. labor laws, which heavily favored the UAW and other big unions.
...

The UAW deserves its demise.  It made demands untethered from economic reality and was partly responsible for the loss of market share.  The other reason for loss of market share is that they were building lousy cars that could not compete on quality with the imports.

Hondas not only got better fuel economy but they also required less maintenance cost and needed fewer repairs.   The same was true of Toyotas.  I have no sympathy for the UAW.

They have cost Americans billions in bail outs and higher prices while producing vehicles of less quality.  They have driven GM and Chrysler into bankruptcy.  If Detroit is also failing, the auto unions bear some of the responsibility along with the incompetence of liberal Democrats who controlled the city for over 50 years.
Autos