'What's it like to work for a network that protected a pedophile?': Donald Trump Jr. slams The View Host Sunny Hostin over ABC's Epstein investigation 'cover-up' in furious twitter exchange 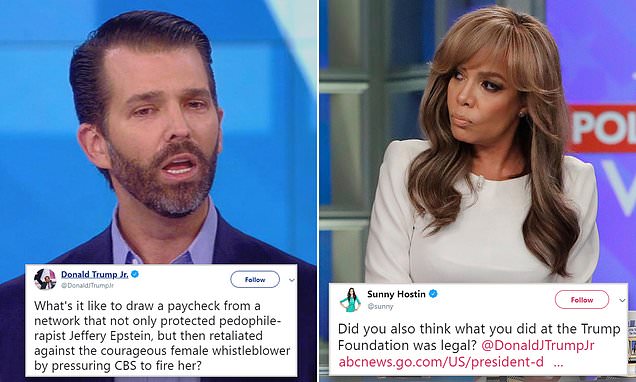 Donald Trump Jr blasted The View host Sunny Hostin by asking 'what it's like' to be paid by a network that 'protected pedophile-rapist Jeffery Epstein.'Their fiery exchange came days after the two went head to head on ABC's The View where Trump Jr defended his decision to tweet the name of the now-famous Ukrainian whistle-blower.The shouting match that ensued included sections of the live studio audience booing loudly, leading co-host Whoopi Goldberg to vent during a commercial break.Co - host Hostin suggested that Trump Jr. committed a 'federal crime' for disclosing the name.Hostin asked Trump's girlfriend Kimberly Guilfoyle, a former prosecutor on the show, 'Did you advise your boyfriend that it is a federal crime to out a whistle-blower?''It's only a federal crime for the IG [Inspector General] to do it,' Trump Jr. shot back. 'That's a lie.'But the First Son took a swipe at liberal TV personality by sharing an article refuting her claims.'Not sure where The View's @Sunny got her law degree from, but she should think about asking for a refund,' Trump Jr. fired back on Friday.

The intellectual lightweights on this show are not used to this kind of pushback against their biased coverage of events.  It is nice to see that at least on media source reports on the embarrassing ABC effort.
Media Trump