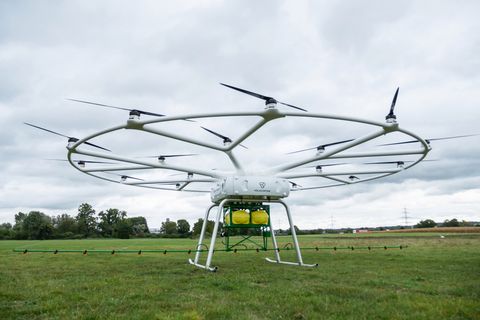 Volocopter, the multicopter startup, has partnered with John Deere to announce a planned cropdusting craft, Tech Crunch reports. Volocopter’s base VoloDrone will be fitted with an agricultural trim package to allow more controlled spread of farming chemicals with potential for less waste and maybe even less cost overall.

A traditional helicopter has one or sometimes two rotors, and each rotor has a curved cross-section like that of an airplane wing. These rotors can tilt like a plane’s wing flaps. On the typical consumer-use drone, there are four rotors that are mounted at a fixed, static angle⁠—one at each corner, which mimics the full range of motion and attack angle of a traditional helicopter. (Helicopters with two rotors are usually using the second rotor to generate more lift overall in order to carry heavier payloads.)

But Volocopter’s VoloDrone design has a whopping 18 rotors, capping off a Dungeons & Dragons’ dice bag of hexacopters (six rotors), octocopters (eight rotors), and more. Volocopter says the small, electric, remote-controlled craft can carry over 400 pounds for about 30 minutes. Each can be programmed to follow a set path, which saves time and money over manual control for farmers who run the same routes as part of a routine. Even manual remote control is a far cry from the industry standard of hiring piloted helicopters or kitted-out small agricultural planes.
...

This is a good example of how drones are becoming a tool with several civilian uses, that will make people more efficient.
tech UAV's