Iran having trouble storing all the missiles it has built


Iran's Revolutionary Guards have so many missiles they don't know where to hide them, a senior commander said at Friday prayers, after the United States threatened to impose fresh sanctions.

"We lack enough space in our stockpiles to house our missiles," said General Hossein Salami, the Guards' deputy, as a row with the US over Iran's ballistic missile programme deepened.

"Hundreds of long tunnels are full of missiles ready to fly to protect your integrity, independence and freedom," he told worshippers in Tehran, promising to never "stop developing our defence deterrent".

Iranian state television aired in October unprecedented footage of such an underground missile base.

The general's comments came after reports that the US had planned -- but later shelved -- to unveil a fresh round of sanctions following two recent missile tests by the Islamic republic. 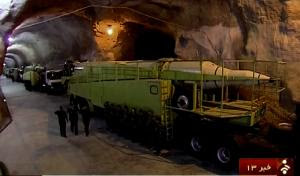 A grab from Islamic Republic of Iran News Network on October 14, 2015 is said to show missile launch …


They also put in jeopardy a landmark deal struck in July between Iran and six world powers including the US, which is due to be formally implemented within weeks.

Iran's President Hassan Rouhani denounced the US moves Thursday as "hostile and illegal interventions" that must be met with a response.

He ordered the military to intensify its missile development and take whatever steps necessary to start new programmes if they would better serve Iran's defence.
...

This is more evidence of the bad judgment exhibited by Obama and other leaders in cutting a deal with Iran that will provide the funds for more weapons development as well as fund their terror operations.
Iran

December 13, 2021
Zero Hedge: Hospitalizations, Mortality Cut In Half After Brazilian City Offered Ivermectin To Everyone Pre-Vaccine ...   The authors adjusted for relevant confounding variables, including age, sex, medical history, previous diseases, and other conditions. The analysis contradicts an October report by  Business Insider  which claims, based on a Brazilian ICU doctor's  anecdotal evidence , that the experiment was a failure. ... We're sure the 'fact checkers' are already hard at work trying to debunk the pre-print, however they may also want to take a look at  ivmmeta.com  - a real-time meta analysis of  70 studies  which found that Ivermectin works as a prophylaxis  83% of the time . In peer-reviewed studies, it was found effective  70% of the time as an early treatment , and just 39% of the time as a late treatment. As we noted during the whole 'horse paste' controversy: Ivermectin This widely prescribed anti-parasitic which is  also  used in horses has shown
Read more