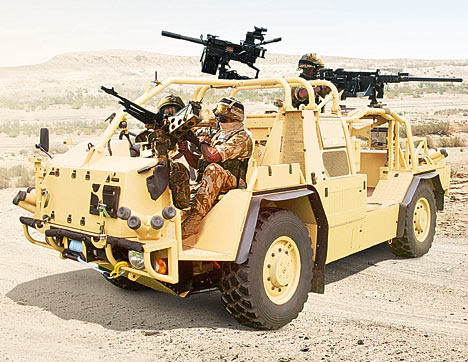 The Daily Mail reports on the new vehicle:

The new 4x4 vehicles, described by one serving officer as 'like a Land Rover on steroids' with a gun platform bristling with weapons.

It will be also be fast for a four tonne vehicle, with a potential top speed of 80mph.

The new machines are technically known as MWMIKs (Mobility Weapon Mounted Installation Kit) but are known as Wimiks by the troops who use them.

It has a range of firepower, including a .50 calibre machine gun or an automatic grenade launcher and a general purpose machine gun.

It carries up to three soldiers with their individual weapons, and can operate on a variety of terrains, including off road.

The first of 130 of the British built and designed weapons has just started production in Plymouth and will be delivered early next year.

December 13, 2021
Zero Hedge: Hospitalizations, Mortality Cut In Half After Brazilian City Offered Ivermectin To Everyone Pre-Vaccine ...   The authors adjusted for relevant confounding variables, including age, sex, medical history, previous diseases, and other conditions. The analysis contradicts an October report by  Business Insider  which claims, based on a Brazilian ICU doctor's  anecdotal evidence , that the experiment was a failure. ... We're sure the 'fact checkers' are already hard at work trying to debunk the pre-print, however they may also want to take a look at  ivmmeta.com  - a real-time meta analysis of  70 studies  which found that Ivermectin works as a prophylaxis  83% of the time . In peer-reviewed studies, it was found effective  70% of the time as an early treatment , and just 39% of the time as a late treatment. As we noted during the whole 'horse paste' controversy: Ivermectin This widely prescribed anti-parasitic which is  also  used in horses has shown
Read more